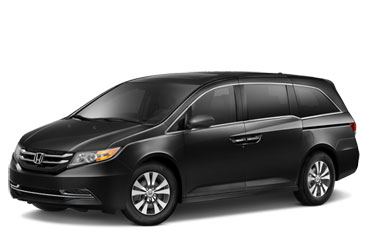 The Honda Odyssey has been one of the safest minivans available for years now, and it shows in the recognition it’s received. The 2014 Honda Odyssey comes with safety technology that is once again proving Honda’s total dedication to the protection of American drivers.

The Insurance Institute for Highway Safety (IIHS) conducts a thorough battery of tests on new vehicles to ensure that American drivers are offered comprehensive protection from harm. The 2014 Honda Odyssey held up well under all conditions, becoming to the only minivan to earn the highest possible rating in the IIHS small overlap front crash test.

The Odyssey has remained a segment leader in IIHS safety ratings since 2011, and no other manufacturer can beat American Honda in terms of Top Safety Pick and Top Safety Pick+ ratings.

The 2014 Honda Odyssey features precision engineering on every level; the bodywork itself is intelligently designed to keep your family safe from harm. Each model features the Advanced Compatibility Engineering (ACE) body structure, which uses differing grades of steel that, on impact, crumble in some areas, but remain rigid in others.

This means that collision energy is distributed evenly, and is directed away from the passenger compartment. Complemented by other body reinforcements, this built-in safety technology will help protect you and your family from harm.

There’s a wealth of available safety equipment on offer, which can expertly cater for the individual needs of each driver. However, Honda has chosen to include a number of features as standard, to make sure that, even before making the minivan your own, you get a good level of base protection.

An anti-lock braking system (ABS) is installed on all models, and this safety feature works with the Vehicle Stability Assist system –also standard – to enhance traction control, detecting and reducing both oversteer and understeer. In addition to numerous standard airbags, the 2014 Odyssey also carries dual-stage multi-access front airbags and SmartVent side airbags, so your body is intelligently cushioned against impact energy in the unlikely event of collision.

Experience the 2014 Odyssey at Middletown Honda

For more information about the safety of the 2014 Honda Odyssey or any other vehicle in the Honda lineup, contact Middletown Honda today!