2015 Honda Accord Sedan: an Award-Winning Vehicle 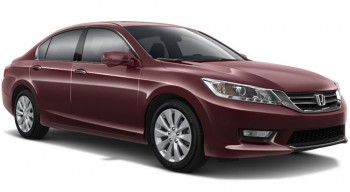 The efficiency and agility of the 2015 Honda Accord Sedan has seen the popular model placed on Car and Driver‘s 2015 10 Best Cars list yet again. This model has become synonymous with reliability and performance, providing a sedan for the full range of drivers’ needs since 1976. We’re proud to offer this vehicle at Middletown Honda, and we encourage you to keep reading for more information.

Continuing a legacy of industry-leading excellence, the 2015 Honda Accord Sedan has been placed on Car and Driver’s 2015 10 Best Cars list. The Accord has found its way to Car and Driver’s list 29 times out of the 31 that the award has been given — a phenomenal run.

Their team marveled at the agile drive, noting that it felt like being behind the wheel of a sports sedan. Car and Driver’s Editor-in-Chief notes that: “The Accord offers terrifically fluid and sporty handling, while functioning perfectly for everyday use.”

The Accord is now in its ninth generation, and we’re proud to report that almost every model has been made right here in America since 1982. Over 95% of every Accord now made is manufactured at the company’s Ohio plant, in Marysville, using domestically sourced parts where possible.

And America seems to love their vehicles as much as Honda loves America! Not just a favored vehicle among industry experts, the Accord has remained a preferred choice for consumers. In fact, it was the most popular midsize passenger car in the country during 2013, and again through September 2014.

Try the 2015 Accord Sedan at Middletown Honda

At Middletown Honda, we’ve come to trust in the exceptional reputation of the Accord, and the 2015 edition stands out even against its successful predecessors. For more information on the 2015 Honda Accord Sedan, or on any of our other fantastic Honda vehicles, don’t hesitate to contact our dealership today. You’ll find us at 520 Route 211 E in Middletown, NY, just a short drive from Mechanicstown and the surrounding communities.

0 comment(s) so far on 2015 Honda Accord Sedan: an Award-Winning Vehicle