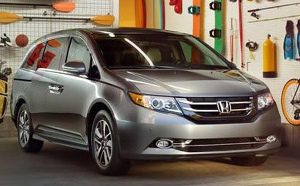 The 2015 Honda Odyssey changes aren’t significant, and that’s good. It fully lives up to the popularity of previous models, stunning features, and spaciousness that have made it such a big hit among Middletown and Mechanicstown drivers. The new model has already found itself appreciated by drivers and critics alike, and is ready to take the brand to new heights. Available now at Middletown Honda, local families have been flocking to our showroom so they can try out this new vehicle.

The 2014 Honda Odyssey was honored with Autobytel’s “2014 Minivan of the Year” award, and named ‘2014 Best Minivan for Families’ by U.S. News & World Report. Honda has recognized their winning formula, with the 2015 model achieving the same level of perfection experienced by drivers in the previous year. For that reasons, the lack of 2015 Honda Odyssey changes is a good thing.

The 2015 edition has already earned accolades of its own. Impressed by its family-friendly design ethic, versatility, and supreme levels of comfort, Kelly Blue Book recently named the 2015 model their Best Buy of the Year among minivans

A large part of why Middletown drivers and critics alike have heaped such praise upon the 2015 Honda Odyssey is its ability to fit itself around your life, with some of the most versatile spacing options available.

You’ll enjoy a large, expansive cabin, with 172.6 cubic feet of passenger space providing everyone with ample room to stretch out and relax. Fully loaded with passengers, you’ll have a generous 38.4 cubic liters of cargo space, but that can be upgraded to 93.1 with the third-row seats folded, or a sprawling 148.5 with the second-row seats down, too.

The space inside the 2015 Honda Odyssey isn’t just flexible, though. It’s also full of features to keep everyone entertained, while allowing the driver to feel comfortable during every journey.

Cutting-edge technology even allows you to control your ride without taking your hands from the wheel, with a suite of available voice-activated technology. Song by Voice will recognize your spoken song requests, a Bluetooth HandsFreeLink system lets you make and receive calls effortlessly, and a Honda Satellite-Linked Navigation system with Voice Recognition keeps you on schedule.

Try the 2015 Odyssey at Middletown Honda

Middletown and Mechanicstown families love the 2015 Honda Odyssey, changes or no, for its dynamic, advanced interior and its agile, responsive drive. To test drive this award-winning vehicle for yourself, contact Middletown Honda today.

0 comment(s) so far on The 2015 Honda Odyssey Changes Aren’t Big, and That’s a Good Thing