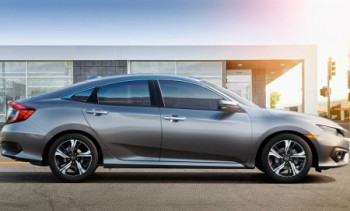 Goshen and Monroe drivers looking for family sedan should strongly consider the 2016 Honda Civic Sedan — it has been named a 2016 Top Safety Pick+ by the Insurance Institute for Highway Safety. The 2016 Civic is the first of the line’s tenth generation; as such, it boasts thoroughly up to date safety technologies and a build that has been refined over decades.

Each year, the IIHS crash-tests hundreds of cars entering the market, and they’ve made the criteria for their Top Safety Pick+ award more stringent over time. A top rating of “Good” is now required in all categories, including the tough small overlap frontal test, and vehicles must have an available front crash prevention system that earns either an “Advanced” or “Superior” rating.

The 2016 Honda Civic Sedan comes with all the standard safety features you’d expect, including a vehicle stability assist system with traction control, an anti-lock braking system, electronic brake distribution with brake assist, and Lower Anchors and Tethers for Children (LATCH).

However, it also provides several unexpectedly premium safety technologies as standard with every model, such as:

In addition to those standard features, Goshen and Monroe drivers can opt for the available advanced driver-assistance features of the Honda Sensing package, which includes:

These features come with some upper-level Civic trims, but Honda has taken the step of making the package available as an option with even the entry-level LX.

If you’re after a stylish and well-equipped sedan with plenty of space and outstanding safety features, just come down to Middletown Honda to ask about the 2016 Civic Sedan. We serve drivers from Goshen, Monroe, and other surrounding NY communities, and we’ll be thrilled to show off the entire Honda lineup.