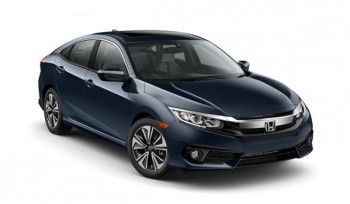 With input from approximately 18 million drivers each month, Edmunds.com has the expertise to know which cars are the most popular. In their annual “Most Popular on Edmunds.com” awards, we were pleased to see that the 2016 Honda Fit topped the list for Best Subcompact, while the 2016 CR-V won Best Compact Crossover SUV and the Civic won Best Compact. With amazing standard features and powerful engines, it’s no wonder all three of these vehicles attracted so much attention. Keep reading to learn a little more about why these vehicles topped the list.

The 2016 Honda Fit is an excellent choice for the subcompact segment because of its space-efficient design and impressive mileage ratings. It’s ideal for city living with a zippy 130-hp 1.5L 4-cylinder engine that enables the 2016 Fit LX 33 mpg in the city and 41 mpg on the highway* when paired with a continuously variable transmission. It also boasts up to 95.7 cubic feet of passenger space and up to 52.7 cubic feet of cargo space with the seats folded down. The 60/40-split second-row Magic Seat makes loading and unloading various shapes and sizes of cargo easy and quick.

Leading the way in the compact crossover segment is the sturdy and efficient 2016 Honda CR-V. The CR-V remains popular thanks to standard features like a Multi-Angle Rearview Camera with Guidelines, Pandora Compatibility, SMS Text Message Function, and Bluetooth HandsFreeLink and Streaming Audio. It is class leader in terms of fuel efficiency, with up to 33 mpg on the highway* with FWD courtesy of its 185-hp 2.4L 4-cylinder engine and continuously variable transmission.

The Honda Civic continues to remain at the top of its game after 10 years of innovation, so it’s really no surprise that the 2016 Civic has earned recognition from Edmunds.com. The 2016 Honda Civic offers a sleek design and forward-thinking technology. It’s one of the safest cars on the road thanks to is Advanced Compatibility Engineering (ACE) Body Structure, and can be made even safer with the available Honda Sensing suite of safety features. It also has the available Honda Satellite-Linked Navigation System with Honda HD Digital Traffic and Song By Voice. In addition, drivers can enjoy optional Apple CarPlay® and Google Android Auto™.

Find Out More About the 2016 Honda Fit, CR-V, and Civic at Middletown Honda

For more information about any of these award-winning models near Goshen or Monroe, come see us at Middletown Honda today or call 855-473-3053. We hope to see you soon!