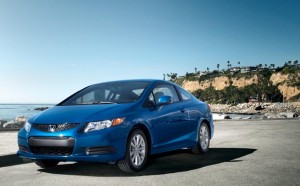 The new 2013 Honda Civic Coupe is now available at Middletown Honda. For 2013, the Civic Coupe features a refined exterior design, along with a number of powertrain options and some fantastic features. That said, there is some competition, and drivers in the market for a new compact car may also be considering the 2013 Kia Forte Koup.

The 2013 Civic Coupe LX comes equipped with a 1.8L four-cylinder engine. It can save you plenty of money at the pump, too, as it’s capable of 28 mpg city and 36 mpg highway (manual transmission models).* The 2013 Kia Forte Koup is powered by a 2.0L four-cylinder engine, but can’t compete with the fuel economy of the Honda model, as it achieves an estimated 24 mpg city and 33 mpg highway. It’s clear which model will save you money at the pump.

Both models come standard with manual air conditioning, power accessories, cruise control, and a CD/MP3 player. The Civic Coupe comes out on top, though, as its standard features also include a rearview camera, a rear electronic parking aid, and a stereo anti-theft system.

Both models come equipped with keyless entry, tinted glass and automatic headlights. The 2013 Civic Coupe also features a vehicle theft deterrent system, which the Kia does not.

The new 2013 Honda Civic Coupe is available now at Middletown Honda. We are less than a ten-minute drive northeast from Mechanicstown, and we’re proud to offer the latest Honda models at our dealership. We are located at 520 Rt 211 East, in Middletown, NY, and we are open seven days a week to serve you. If you need to get in touch, contact us online or by phone at (855) 473-3053.