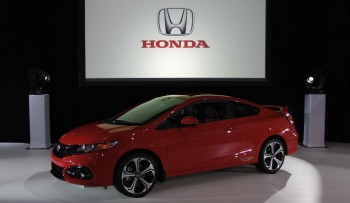 When you are looking for a performance coupe near Middletown or Mechanicstown, we hope just one name comes to your mind: Middletown Honda. We have the SI Coupe trim for the 2014 Honda Civic available now here at Middletown Honda. When it comes to a track-ready performance-tuned coupe, we have a hard time thinking of a better choice. The 2014 Volkswagen GTI is one of the most popular vehicles in the small car performance class, though. Does the Civic SI Coupe compare?

One of the first things drivers notice that separates the GTI from the SI Coupe is the body style. The GTI is a famous member of the so-called “hot hatch” class of performance-tuned hatchbacks, but one of the biggest side effects of a hatchback is increased Size and, thus, increased cost. The 2014 GTI is priced at $25,095, while the 2014 Civic SI Coupe starts at just $22,790 (MSRP).

You get more than just $2,305 in savings when you choose the Civic, though.

While the Volkswagen is priced higher than the Honda, VW falls short in both power and fuel economy, though it’s a close race. Both the 2014 Civic SI Coupe and the VW GTI get an EPA-estimated 31 mpg on the highway, but you’ll find the SI Coupe is more efficient in the city at an EPA-estimated 22 mpg to the 21 mpg of the GTI.*

Not one to be done with a vehicle once they’ve engineered it for success, Honda designers have given the Civic SI Coupe some of the most competitive features in its class, including:

And that’s just the start of it. While some of these features are available on the GTI, you won’t find them all—and to come close to what the Civic has to offer, you’ll have to upgrade.

While it’s true of any car, it is especially true of performance-tuned vehicles like the 2014 Honda Civic SI Coupe that you must spend some quality time in the driver’s seat before you can make a decision. Luckily, Middletown and Mechanicstown drivers know just where they can take one for a test drive.Contact Middletown Honda today and schedule your test drive of the Civic SI Coupe.

*Based on 2014 EPA mileage ratings. Use for comparison purposes only. Your mileage will vary depending on how you drive and maintain your vehicle.