What’s So Great About the Downing Film Center? 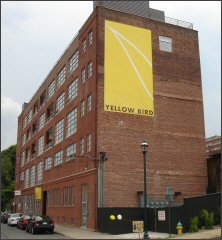 Residents of Newburgh have a lot to be proud of when they take a look around their city; and, since 2006, the Downing Film Center has been a superb addition to our list of attractions. Specializing in world cinema, the Downing Film Center has developed a strong following in the years since it opened, becoming a part of our cultural fabric in the process.
More things to do in Newburgh

Why Should You Check Out the Downing Film Center?

If you’re the sort of person who likes to broaden their cultural horizons, then the Downing Film Center is an excellent place to start. Unlike your local multiplex, they are a not-for-profit corporation that cares about showing world-quality films rather than the latest dollar-making blockbusters. That means that you’ll be able to expand your tastes by viewing pieces of world cinema that otherwise aren’t available locally.

The Downing Film Center opened on Saturday, July 22, 2006 with the Indo-Canadian film Water!, and it’s been going strong ever since. They even offer additional cinematic and educational programming in collaboration with a diverse collection of people from all across the Hudson Valley.

Where Can You Find the Downing Film Center?

Newburgh residents who would like to sample a range of some of the world of cinema’s finest pieces can find the Downing Film Center right on their own waterfront. The theatre is located in the Yellow Bird Building, which dates back to 1925. Once a furniture warehouse, it was fully restored in 2005 by Dick Polich, the owner of the Polich Art Works Foundry, to play host to the Film Center.

That enviable position along the waterfront, just next to the Newburgh-Beacon Ferry, means that you’ll be able to grab a meal at one of the fine restaurants in the vicinity. Of course, you can always just walk along the Hudson as it makes its way out to the Atlantic to discuss the latest film with your date.

What Else Makes the Downing Film Center Different?

To say that the only thing setting the Downing Film Center apart from your run-of-the-mill cinema is its choice of movies would be untrue. In fact, attending a screening feels completely different from what you’re used to.

After you nestle down into one of the venue’s 60 seats, you’ll see the projectionist who lights up the film, then you’ll hear it as it rolls. It really feels more like you’re attending the sort of picture show that your grandparents used to frequent, and you’ll experience everything for less than you’d pay at a multiplex.

Spend Your Next Free Night at the Downing Film Center

If you haven’t yet checked out the Downing Film Center, there’s never been a better time to start. Their website provides a full list of upcoming features and special events, so you’re bound to find something that catches your eye.

0 comment(s) so far on What’s So Great About the Downing Film Center?