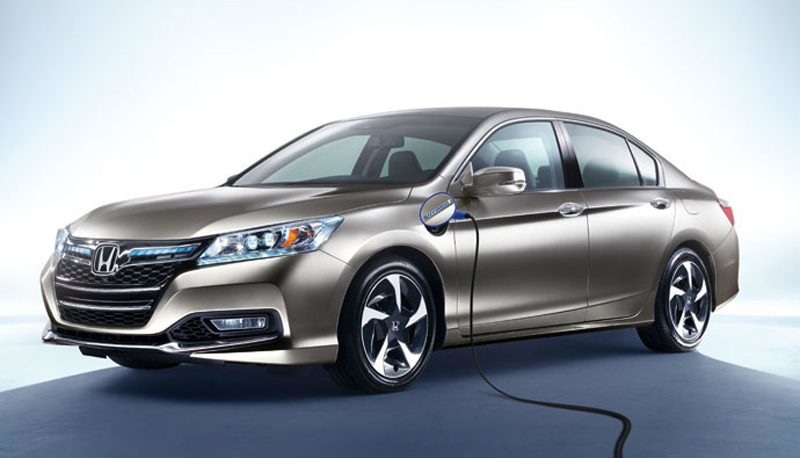 Choosing a hybrid or alternative fuel vehicle is an option that can help many drivers coming to Middletown Honda to save on their annual fuel bills while helping to reduce pollution. Honda has a full line of fuel efficient hybrids, including the Accord Hybrid and Plug-in Hybrid, the Civic Hybrid, and the Insight.

Knowing the key differences between a hybrid and a plug-in car can help you to decide which one might be better than you.

For starters, what exactly gives hybrids their name? A true hybrid vehicle is designed to run off of both gasoline and electric power without typically needing to be plugged-in. The power that charges the battery is typically generated from the special pads in the brakes. By recycling kinetic energy back into a storable energy source, you’re putting the gasoline you spend to work twice.

Models like the 2014 Accord Hybrid use this energy to power the car during braking and when starting from a stop, when torque needs are highest. There are some plug-in Hybrid models, such as the 2014 Accord Plug-in, that you can fill up at the pump and charge from an outlet in your garage to drive on electric power.

Like the Accord Plug-in, fully electric vehicles can be charged right from home. Using a 240V plug, the kind you would use for your dryer, the 2014 Honda Fit EV can be charged in as little as three hours. What’s even more incredible is the 2014 Fit EV has an estimated range of 82 miles on a full charge, more than twice most drivers average commute.*

A hybrid vehicle is a great choice for anyone who has a long daily commute, both in and outside the city and wants to cut down on fuel costs. For drivers who have an average commute, an electric vehicle is a very strong option. In most places, it is much cheaper to drive 10 miles on electrical power drawn from your home than 10 miles on gasoline bought from the pump. To learn more about available hybrid cars, contact Middletown Honda.

* 132 city/105 highway/118 combined miles per gallon of gasoline-equivalent (MPGe) rating; 82 mile combined (city/highway) driving range rating (adjusted). Ratings determined by EPA. Use for comparison purposes only. Your MPGe and range will vary depending on driving conditions, how you drive and maintain your vehicle, lithium-ion battery age/condition, and other factors. For additional information about EPA ratings, visit https://www.fueleconomy.gov/feg/label/learn-more-electric-label.shtml.

0 comment(s) so far on Hybrid vs. Plug-in Cars: What’s the Difference?