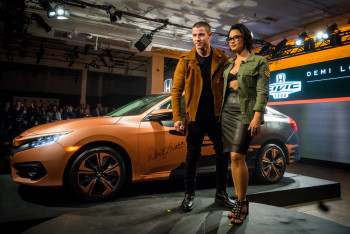 Exciting news for Goshen and Monroe drivers: Demi Lovato & Nick Jonas will be headlining the 15th Anniversary Honda Civic Tour this summer! With 37 locations, this year’s Honda Civic Tour is expected to be an impressive show. Keep reading to learn all about what you can expect and where you can catch the tour throughout the US.

The Honda Civic Tour is promoted exclusively by Live Nation and launches June 24, 2016. Demi and Nick will tour 37 cities throughout the U.S. Some of these dates include:

Both the artists and the promoters are aiming to make this tour an unforgettable one with incredible performances and a spectacle of a show. There’s also a sweepstakes for ticket holders called The Power of Dreams, which will allow one lucky winner an ultimate backstage VIP experience, including an arena tour, a look inside Demi and Nick’s tour bus, a chance to walk on stage prior to the show, and a private meet-and-greet with Demi and Nick after the show. There’s also a sweepstakes for a trip to LA for two to meet Demi and Nick and a chance to win a customized 2016 Honda Civic. Enter online before the show!

Goshen and Monroe customers can learn more about this memorable show at Middletown Honda or by contacting us online. We look forward to seeing you soon!