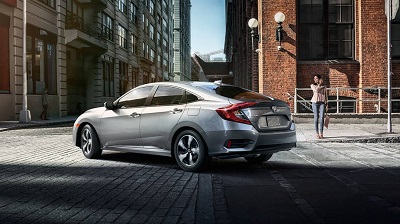 The 2016 Honda Civic reviews have confirmed what Goshen and Monroe drivers suspected all along: this is a class-leading vehicle. The toughest critics in the industry were unanimous in their appreciation of this new 10th-generation Civic, acknowledging it once again as a must-drive choice for anyone looking for a compact sedan.

“Like the best Civics of yore, the new one feels sporty and fun when you’re driving it on winding back roads. Unlike its predecessors, however, it’s fairly quiet inside at speed, and its ride is more compliant than ever.” – Edmunds.com

As outlined in the Edmunds.com review, the drive of the 2016 Civic retains the best of the old while moving into the future. That’s thanks in part to two all-new engine options: either a 158-hp 2.0l four-cylinder or a 174-hp turbocharged 1.5L four-cylinder. However, the power steering and rear suspension have also been enhanced, creating a drive that’s both controlled and fun.

“In the back seat, the Civic outperforms almost all the cars it names as rivals, and some others, too. There’s enough head and leg room for six-footers to sit behind six-footers, with an inch of knee room to spare.” – The Car Connection

The platform of the 2016 Honda Civic has been extended to create tremendous amount of space for Goshen and Monroe drivers. With 97.8 cubic feet of passenger volume and 15.1 cubic feet in the trunk, the Civic dominates compact sedan segment.

“The interior materials are far richer-feeling than in the ninth-generation’s cabin, with a layered dash design that makes the plastics seem unexpectedly sophisticated.” – Car and Driver

The team at Car and Driver was blown away by the 2016 Civic’s interior, lavishing praise on the cabin’s upscale design. Both the front and rear seats can be heated, leather upholstery is available, and features such as an advanced multi-angle rearview camera come standard.

Now that you’ve heard what the critics have to say about the 2016 Honda Civic, you’ll doubtless be interesting in taking one out for a test drive. Come down to Middletown Honda today to do just that.