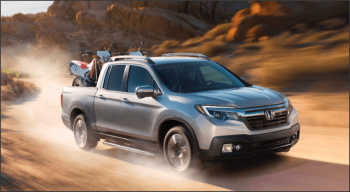 2017 Honda Ridgeline reviews have finally started to be published, and drivers from across Goshen and Monroe are eager to hear the experts weigh in. After taking the 2016 model year off, the Ridgeline has been comprehensively redesigned for 2017 — judging by what the critics are saying, the time was well spent to make this truck a contender.

“The fully redesigned 2017 Honda Ridgeline hangs on to what made it unique while introducing improvements that make it more functional and attractive to a wider audience.” – Edmunds.com

Few redesigns have seen such a shift as that of the Ridgeline for 2017. Horsepower and torque have both been improved, and fuel economy has also taken a few steps forward. A newly available two-wheel-drive model adds versatility (while all-wheel-drive is also an option), and you’ll be able to benefit from technologies and amenities that just can’t be had with other trucks.

“One area where the new Ridgeline unquestionably has the upper hand in the midsize truck market is safety.” – Automobile Mag

The 2017 Honda Ridgeline reviews attest that it lives up to Honda’s sterling reputation of manufacturing vehicles loaded with safety features. The vehicle’s ACE (Advanced Compatibility Engineering) body structure is just part of this, but the Honda Sensing suite is also available to help make sure you never have to put it to the test. Features like Adaptive Cruise Control and Lane Departure Warning can also be added.

“Its quieter interior is loaded with tech-friendly features and there are all-new truck bed innovations for work and play.” – Kelley Blue Book

As noted by Kelley Blue Book, the 2017 Honda Ridgeline brings plenty of up-to-date interior technologies, including both Apply CarPlay® and Android Auto™ functionality. It also delivers an outstandingly innovative bed, which offers an industry-first integrated audio system. There’s also an in-bed trunk that can hold an entire 82-quart cooler, and the tailgate can open from the side in addition to dropping down to facilitate easier loading and unloading.

It’s always gratifying to see models like the 2017 Honda Ridgeline garner the type of attention that they deserve, but the reviews we really care about are those that come from Goshen and Monroe drivers. To take the new Ridgeline out for a spin and tell us what you think, just visit the Middletown Honda showroom today.

0 comment(s) so far on 2017 Honda Ridgeline Reviews: This Truck Tops the Competition